I spent all day yesterday doing bank reconciliations for work. They literally give me a headache every time. I'm assuming it's because I have the statement open on one screen and the accounting program on the other and just keep looking back and forth all dang day. But, it's all done. I totally lost track of time too! It's an hour earlier at the office and I was so engrossed in getting this done I thought it was 4pm my time, so was going to go downstairs to get a drink of water, and finish up my last half hour of working. And I see it's 5pm, LOL.

We got some snow all day yesterday, so dh got to shovel and plow for about 90 minutes. None expected today, but tomorrow is supposed to again. Ugh, we have to drive into the city in the morning for his biopsy.

UPS came late evening with 5 packages. It's that time of year, haha. At least Amazon did a better job of putting more than one thing in a box. One box had 3 orders and another had 2. Home Depot couldn't put the 2 things I ordered in the same box. A solar light and a pack of electrical tape. The solar light looks neat to light up the manger scene a bit. Dh is now thinking he needs to build a black backdrop out of plywood, so that when lit it would show up better. 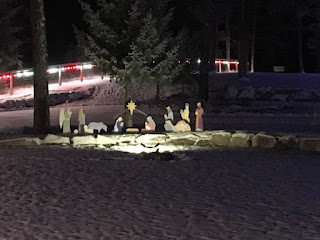 My rosette irons arrived, along with some cute holiday food type gift boxes that I will put my rosettes and white chocolate bark candy in. I think I'll try making those this weekend, if my ingredients arrive for the bark candy.

Our solar powered gate to enter our driveway/property has been kind of a pain. Sometimes it works, sometimes it doesn't. All last summer, pretty much any time we needed to leave in the morning hours it wouldn't open. Or it would open a foot and then stop and start beeping. The other day we went to leave (in the afternoon) and it got halfway closed and stopped and started beeping. Yesterday we weren't even using it and it started beeping! I guess the battery died. From the snow? who knows. Our plan was to eventually have electrical hooked up out there, but that is still not in the budget right now. So, dh just ordered a 200' extension cord he's going to plug into it out there for now. Hopefully that takes care of the issue. We are tired of saying "well, is it going to work this time? every time we want to leave or come back in through it. Hopefully electricity works! if not, then dh says it's the battery that came with the gate opener system that is bad or something in the control box.

Mrs. Neighbor did her annual decorating of the mailboxes. DH saw them when he went to get our mail yesterday.  Mr Neighbor plowed his driveway about an hour or so before dh did ours. DH still, after 3 winters, cannot figure out why Mr. Neighbor thinks it's ok to plow a burm of snow a foot deep across the street, as he plows his driveway out. The other 2 of us who live past this burm of snow have to then drive our vehicles over it. Not too big of deal for young neighbors who have a truck and an SUV. Not the best thing for my regular car. Like dh says, when he pushes his snow out past his driveway, when he makes his final turn to come back, why not just knock that burm down and plow it onto the edge? But, as usual dh has to remove it when he plows. Just weird. Like dh said, he would never plow our of our driveway, keep going across the street and leave a burm for the neighbors on past us to have to drive over. It's not a huge deal, because dh will be out there anyway to plow, but if dh happens to do his plowing before Mr. Neighbor does we are either left with a burm (and how big depends on how much snow we got) to drive over or dh has to get out the quad again and plow it down.

Ok, it's taking me forever to get this post written up. I guess I'll just be done now.