Yesterday was 71 degrees out. This morning, not so much.....LOL 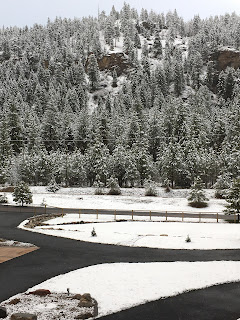 Yesterday morning we were outside at the fence chatting with Mr. Neighbor. Mrs. Neighbor came home from town and said that camper is now parked about 3 miles farther down the road, towards town, in a parking/pull off area on the side of the road, so obviously had been there since the day before, when they left their campsite nearer us on Saturday afternoon. I said well, at least he's heading in the right direction, away from us. The red pick up was not there, she said just a black BMW, which no one had seen with it before. When I saw the red pickup hooking up to it Saturday, there was also a white car there. There's quite a few houses across from where he's parking, so I imagine they will be reporting it now. 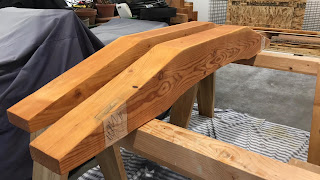 I don't know how long it will take him to finish it, as he still has to get/buy some wood for the "floor" to walk across. FedEx delivers on Sunday here, so my new navy blue patio umbrella was delivered. It's still in the box. DH is going to make a base for it, with the Quickcrete he bought, but he was waiting to find out the size of the pole before he makes it.

He continued to work on some other pieces he had to cut for it, while I went inside the house. Read a book for awhile, looked at things on Etsy for awhile, and then took about a half hour nap, that I didn't really sleep. At 4:30 I got up to feed the dog and as I'm walking by I see out the front door windows a pick up parked in our driveway and dh talking to someone out there. I had no idea who's truck and then I realized it was his best friend from Texas! He had been in WA last week for several days and took a bit longer way home so he could stop by for a short visit. DH had no idea he was coming until he called him from outside our gate, haha. They have been friends for 40 years. He didn't want to stay the night, but we did get a good visit in with him until late evening. Even got to sit out at our new patio chairs and table. The last time he had stopped by we were just starting on building our house. When he came inside he said it looks just like a mountain lodge. Then he said "everything matches" and I'm like it does?! LOL. He said yes, all the wood and stone and decor matches. He said that picture frame (we just put above our tv/fireplace) is a perfect match. I said I looked for that forever LOL. He said "my house (he has a really nice house) nothing matches, LOL".

I didn't get to bed last night until 10:30, so I'll probably be tired by this afternoon.