Did I mention it's hot in Texas? and muggy? YUCK! It was hot in Wyoming and Colorado on the way, too. But, Dallas area is muggy. DH was soaking wet by the time he got the car unloaded off the car trailer at nearby neighbors house.

Friends wife had us drive to a neighbor about 1/2 mile from their house, about an hour before the party. Those people were going to the party too, so they got the text to come over. Friend was on an errand his wife sent him on and everyone was to arrive then, except us. We were to wait until he got back home and got surprised with the party. Then wife told him one more surprise coming. We had to wait about a half hour, so we finally got smart and just went and sat in our pickup with the engine and a/c running to stay cool. Dh changed shirts, haha.

Finally we got the "go". Dh drove the muscle car over and down their long driveway with everyone standing outside. Friend didn't know what to think. As we got closer he realized it was us. He said his first thought was dh got a muscle car and drove it all the way from Montana?! When dh got out of the car he kept hugging dh (crying of course. He had already been crying from getting surprised by the party) thanking him for coming. Dh kept trying to pull away, LOL. Finally, he did and held out the keys to friend. Friend was so confused and shocked, LOL. He's like what? this is for me? Yep, just delivering your wife's present! Lots more crying, haha. Needless to say us, and wife, were relieved this was finally over with.

Someone got a good video of it all and then she shared it with us via Airdrop to our phones (learned something new!). After friend finally realized it was his, LOL, dh said take me for a drive in it to go get my pick up and trailer. Friend did a burnout along their nice driveway. A few asked dh why he didn't come in all fast and revving it up. Dh said "it's not my car, it's his to get to do that with".  He and dh have been friends for 40 years.

We all moved inside (did I mention it's hot and muggy there??) where it was much more comfortable and ate and visited. We only knew one other person there, friends brother (he's the one who drove our semi trailer of belongings to Montana for us). The rest were local friends they have made the past 5 years. She had invited a few from our old home state, but they didn't come. Another was a lady who's his wife's best friend. She actually lives in Montana just a couple hours from us. She was so much fun. We really enjoyed getting to know her.

The rest of our stay there we stayed at friends house, so no hotels (yay). His brother flew out Sunday morning, so then it was just us and wife's good friend. We kept busy. Sunday we went to the Ft. Worth Stockyards, which was lots of fun. Thank god all the shops have a/c, as it was like 97 outside. Very crowded, but not so bad you couldn't enjoy yourself. At one store I was able to find another cowhide rug. One that fits my bathroom this time. We were looking through some of them, but they were either the small calf hide size or really big ones. I told friend's wife I need something in between. She found a guy that worked there and asked him and then she came and got me to where there was a big stack of in between sized. The guy helped me look through them and pulled out a couple I thought I might like. I was explaining to him I'm using it in my bathroom and he said well, if it's too big, just cut it! Oh, I never thought of that!  I haven't cut it yet, I just folded it under, but this fits much better. 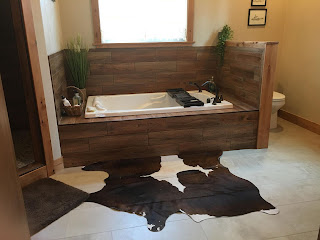 We went to a candy store where you grab a bucket and fill up what you want and it's charged by weight. I would have picked all chocolate stuff, but it would've melted, so we got what dh wanted which was a bunch of different taffy flavors and butterscotch. $24 for a bag of candy. LOL. We had lunch at one of the restaurants. Even though it was busy there, we got seated right away and served quickly. At 4pm we watched the longhorns go by 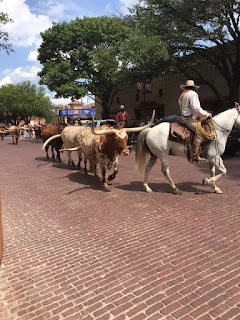 I also sat on the longhorn where you could take a picture. I think everyone thought I wouldn't do it, haha. Heck ya! I'll get on him.

Dinner every night ended up being like 7 or 8pm. I'm so not used to that. Nor used to eating so much (lunch and dinner) every day. Even Saturday evening, after the party we ended up going out for Mexican food.  I've lost track of where we all ate now. We did do In and Out Burgers for dinner and that was good.

Monday we drove around and went to this HUGE gas station with a HUGE store. Buc-cee's or something like that. Half gift shop, half food, half food to go. We all got something to take with us and that was lunch. Sandwiches, Kolachee's. etc. Then we drove to Texas Motor Speedway. There happened to be a gate open so we went inside and looked at the track. There was some kind of high school solar car competition going on, so we watched that a bit. I think this was the evening we went to In and Out Burgers. Dh and friend drove the muscle car, we rode in wife's car.

Wife's friend flew out Tuesday morning. We decided to stay and leave Wednesday morning. Friend's wife and I took off down to Waco (about an hour away) to see Magnolia Silos, which was a lot of fun. A lot of stuff to look at and immaculate everything, but way too expensive of stuff. Friend had been there a few years earlier and said they weren't charging for parking then. Now it's $10. Chip and Joanna sure know how to market their brand, though. We got lunch from one of the little trailers serving food and sat over in a nice seating area with comfy cushioned chairs and fans blowing. No one else was even over in that area, so it was nice and quiet.

The guys were supposed to just hang out at home (and dh wanted to do some laundry LOL) but when we got back they were gone. They had gone to some huge auto parts store down there. Everything is huge in Texas. Even their rest areas on the freeways are huge and really nice.

We went out to dinner to a nice restaurant. Finally we got the check, LOL. They wouldn't let us pay for anything. Again this was dinner at like 7 or 8pm.

Breakfasts were a pretty much fend for yourself with what they had. Usually I just had a cup of coffee and a piece of toast or a banana.  They sleep in quite a bit later than us, LOL. They have a really nice 3200  sf house on 5 acres and have been having it professionally landscaped. Brick (everything is brick there) estate type looking house. Friend has a huge shop. It was big to begin with and he added on to it and more than doubled in size. They have a nice pool and hot tub, which they also updated and landscaped around it nicely.

Us girls got in the pool for a couple hours on Monday afternoon, while the guys were gone, which was nice and refreshing. We all never seemed to run out of anything to talk about.

Then Wednesday started the 1750 mile drive back home.