Rather than maybe end up confusing my mom already more than my uncle seems to have confused her, I texted him first to see if he was able to resolve what he needed her to do.  He found a buyer for her car. Now, originally he said he wanted the car, so he'd have a better daily driver than his old pickup. My mom just decided to give it to him as a gift. I honestly never really believed that he would keep the car for one minute. Uncle is constantly buying/selling cars, his whole life. When he picked up the car, DS also got the title from my mom, so I'm assuming they had her sign it.

So, in this week or so he's had the car, he of course didn't transfer it to his name, so it's still in her name. To sell it, he needs her to sign a bill of sale. Well, I guess that has been an ordeal the past day or so, because she can't remember details or 100% understand what he needs her to do. So, it sounds like he ended up having to make numerous calls to her Wednesday to try to work through this, which of course, she got overwhelmed and then couldn't do much of anything. He was trying to get her to sign it and then have DS pick it up, but DS couldn't that evening, so he was trying to get her to  mail it to him, but she was apparently even confused how to do that, or even if she had any stamps. Then uncle was just going to try again have DS stop by her place and pick it up and have him mail it, but apparently DS started a new job and hasn't had time. I can imagine exactly what uncle probably went through trying to talk her her Wednesday. He'd talk to her, think she understood and half hour later she'd probably call him, saying "now what exactly did you need me to do?".

Now, I know she has stamps, I remember seeing them in one of her desk drawers (when I was searching for her password list she misplaced). A sheet of 20 stamps just laying right on top in the drawer. Rather than call her about it, I first texted uncle and asked him if DS managed to get over there last night to pick it up for him and he texted back that she was able to borrow a stamp from a neighbor and is supposed to put it in the mail this morning, so he said he's going to call her at 10am to make sure she did. I would guess by this morning she's totally forgotten about it. She couldn't even remember to take down her rent check a couple of weeks ago! He should have just made it as easy on her as possible and just made the 2 hour drive to her place and picked it up himself from her. Or knowing he was going to sell it, he should have just had her sign a blank "bill of sale" when DS got the title from her, so he'd have that to use when he did sell it. I called her right after lunch yesterday and had her look in that drawer, but no stamps (I know she hasn't used them up, she rarely has anything to mail). What does she do with this stuff?! I told her that I would order her some stamps online and they will be mailed to her in a few days, so she'll have some on hand. I'll just have to have her tell me where she puts them.

She also made a comment about "all my jewelry is missing, so I hope it's just that I hid it in a good place". When DD and I were visiting that weekend, she and grandma went through all her jewelry (they were getting things ready to take to goodwill). She set aside a bunch of costume stuff to go to Goowill. DD too several things, I took a pair of earrings. She was left with a little bit in a small jewelry box and what she was wearing. Apparently she's forgotten. So sad. Her diamond wedding ring is in DD's safe. We did that when she moved, so it wouldn't get lost.

Here's a picture of my new duvet cover. Even though I washed and dried it first, it's still got some wrinkles in it, but I wasn't in the mood at 8:30pm to iron it. Maybe next time it's off and washed, LOL. 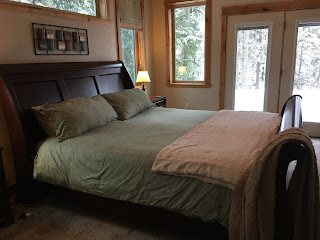 I apparently scratched my eyeball a few days ago. Ouch. I've done that once before and had gone to the eye dr. where they gave me some eyedrops to use for a few days. I remember the dr. saying to make sure to put some in before bed, as the eye dries out and when you open your eyes it irritates the scratch. Yep, it sure does. The prior 2 nights I had opened my eyes to look at the time and ouch and  my eye ached the rest of the night. Last night I put drops in (and had a couple of times during the day) and had no problems last night and it's feeling better this morning.

I just have to work a half day today and then we also get Monday off, so yay for a nice extended weekend.  Oh and guess what? Neighbor Mr. texted Dh last night to ask how the dogs did yesterday. He said he was gone for a few hours in the morning and had taken 2 of the dogs (one being the barker) with him. When he left again that afternoon for another few hours he said he put bark collars on 2 of the dogs. Weird, because DH had gone outside and walked over to their fenced kennel to say hi to the dogs and give them treats. He came back in and said "weird, they only put a bark collar on M, but not the problem dog". M rarely barks, LOL. So, Mr. says he put bark collars on both and DH only saw a bark collar on one. Who knows, DH didn't say anything to him about it. Then he texts that they will be back to 6 dogs for the long weekend. Son and family are visiting again and they are worried his big dog and their problem dog will get in a fight again (like they did last visit and had to take dog to emergency vet). Oh geez. How about either just telling them to leave their dogs home or at least keeping the dogs separate while they are here? But, I'm sure it's going to be noisy chaos to listen to again, with 6 dogs for the next 4 days. Sigh.........