It was kind of a tiring weekend. Only because DH was so crabby and I couldn't seem to do anything right. I do know that I am done trying to fix/resolve any of his tech problems, whether it's with phone, computer or drone. He wants to use them but does not know anything about them and then blame me if it doesn't work or if I try to fix it. It seems like if you try to fix a problem it just ends up changing another setting. I don't know any more about it then he does, I'm just willing to at least get online, do some research and try to fix it. From here forward my answer will be "sorry, I have no idea how to fix it" and he can figure it out himself.

My DD got her promotion and raise, but she's still really hoping to find a new job. I guess the two jobs (at same company) she interviewed for are still pending, so I there's still hope. Last week she got food poisoning and was very sick for 2 days and had to miss work. This week was supposed to be her 4/10 work week and have Friday off. She has plans for Friday as her DF has a friend from out of the country visiting with them this week. When she got back to work last Thursday, they told her she could not have her 4/10 week next week, since she missed 2 days during the week before. She is like what in the world does being out sick for 2 days one week have to do with the next week? She will still be working 40 hours this week. I could see if she was sick during her 4/10 week and then they said we need you to work Friday.  She's just pretty fed up with the company. They have the strangest policies and then constantly change them. I told her to make them clarify how far in advance using a sick day affects her 4/10 week (they rotate working 4/10's one week a month). LOL

We've got a little bigger framing work crew here today. There's 3 guys instead of 2, haha. They are working on framing the garage attached to house. And I think the main guy is still trying to figure/plan the big window wall in the great room. 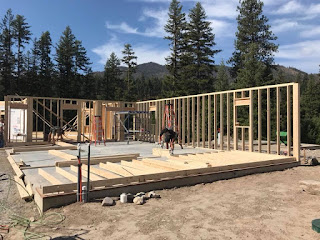 Weather has cooled down to low 70's and 60's this week, though it was warm in the 80's over the weekend. So sick of all the bees. We don't remember them this bad last year. DH got stung a couple of times on Friday, they were so bad.
Posted by One Family at 12:11 PM