DH has (finally) gotten my requested sofa table done!! This was my initial inspiration on Pinterest that I wanted something like: 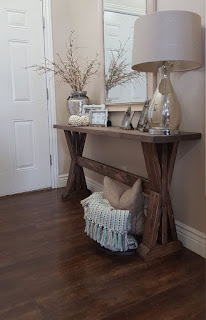 My new sofa table doesn't look a whole lot like this one LOL - but it's beautiful, I think. And one of a kind, unique.  First off, it looks different because DH came across some live edge lumber and decided to use that. I love it - so much more character to it.  Second off, I wanted the table top to be a bit narrower (which worked out perfect for the piece of wood he got). He made the base/feet wider, but I also think my table might be a bit longer than this one and he wanted a sturdier base.  Plus, he decided to change the legs design a bit. And the piece of wood going across, underneath the middle? Well, he had a piece for that (cut from the top length slab) and that was a lot wider than the pinterest one, but had so many neat knots and live edge bark on it, that we decided to use it.

Here is my new sofa table 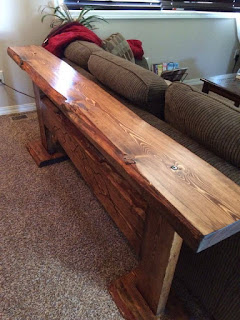 When DH saw this wide piece attached underneath  he thought it would sure look neat with a mountain carving on it! So he did it! He just sketched a mountain scene in pencil and grabbed his router and within minutes had it carved out! I LOVE IT! 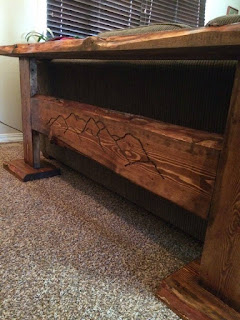 The stain I picked out was Red Oak, to match some of the bark....the only problem that didn't turn out quite like I had envisioned was, while he didn't stain the bark parts, with the rest of it stained and it's almost an exact match in color, the bark doesn't stand out as much as it did/would have if we had used a bit lighter stain.

We are still learning about applying stain and had never used a poly coating, so that was a bit trial and error. When he applied it on top, he realized he didn't sand it enough, as the sanding marks showed, so he sanded it all off, sanded it smoother and then reapplied the stain and poly and it turned out much better.

It totally has the rustic feel I was looking for.  I added my Ross decorating purchases on top (didn't photo that, as I wanted to show the whole top in the photo) and it looks really nice.
Posted by One Family at 9:19 AM