Not much has been going on here, other than DH has been spending quite a bit of the last few days at the property. The guy should be done by mid day today. When he got done yesterday he told DH he just had a couple more hours of work.  It appears we will come in at or maybe even under budget with this project, which is very nice.

This picture was taken standing at what will be the master bathroom tub window, looking out toward front of property/road 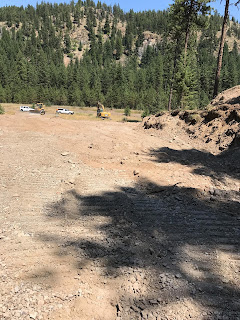 Of course it will look different with landscaping and lawn. That bank area to the right will be a rockery type wall. If we have some money left over from this project, DH might get started on that project.

With the extremely hot weather there was some lightning Sunday night causing some fires in the area. We just have a volunteer fire dept so they have been busy up in the hills. They have headquartered and the 2 helicopters come in at the little airport a few miles from us. On Monday, after I got done working, as we were going out to the property so I could see it, we stopped in town at the grocery store and bought some ice cream sandwiches and put in a cooler of ice. We stopped at the little airstrip and dropped them off to the fire fighter guys. They seemed appreciative of the gesture and I'm sure was nice to have something cold to snack on.

It's been really nice having DH out of the house for part of the days this week. The weather is cooling down a little bit. 90 and low 90', though I'd much prefer about 10 to 15 degrees cooler!
Posted by One Family at 9:43 AM