Sunday was more of a rest/take it easy day. Since the weather was still on the cool side in the morning, DH went out and mowed the lawn while I dusted and vacuumed inside. Later in the afternoon the guy who is doing our site work called and was taking his backhoe out there to drop off and wanted to see if DH could meet him out there again to go over some details. The guy decided to start work on it and end up doing 2-3 hours of work getting some dirt moved and a small grove of trees removed. DH took pics and it's starting to look a bit different already!

While DH was gone I watched a movie on Amazon. Tom Hanks A Hologram for the King. I'd never heard of it before. It was an ok movie. I enjoyed the taxi driver's humor. I can't imagine how that country (Saudi Arabia) gets anything done with the way they do business. LOL.

Here's a picture I took on Saturday, from the front of property, showing the trees that were going to have to go (because that's where our driveway and house is going). We were able to leave the pine tree in front and I think the one right behind the grove of trees, not sure about the pine tree right next to the grove. I know DH was going to try to keep it. I think the driveway will bend around in between the two pines. 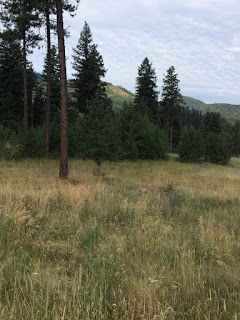 Here are a couple of pictures I took yesterday. That clear spot was where that group of trees had been and the other is our driveway rough cut in 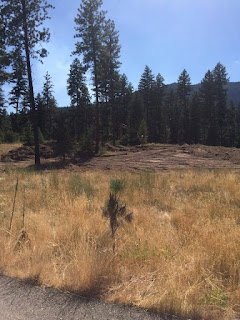 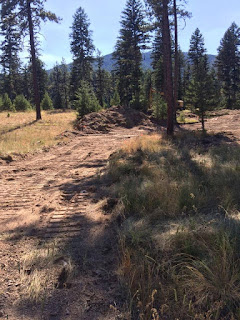 The guy told DH "you watch, now that this will be all cleared and ready for building, someone will offer to buy it from you". DH was like ? why is that? He said it happens all the time. Most people see property that needs work and can't envision how it would look once all the dirt is moved or fill brought in, so they don't want the property. But once it's been prepped then they are like "oh, that's a great piece of property!" LOL

DH was stressing over the county drawings that show where the drain field and well are supposed to go. They have the drainfield right where just about anyone building here would decide to put the house. It's back up away from the bank edge (they'd prefer you didn't build right on the edge) and no one would want to put their house down in the low spot next to the road! Obviously you still want to see the river. Plus they they have the drainfield in the highest spot of the property. DH went and talked to the county planner guy. He agrees it doesn't seem to make sense and would run out there to take a look at it in person with DH. The county can authorize to move the drainfield for us, but if the drainfield gets moved the well will have to be moved and apparently that takes more bureaucracy and will probably cost us about $700. Whatever, just figure it all out. At the high spot we'd have to put in a pump type septic, rather than gravity fed, so we'd eat up that $700 and more by having to have a more expensive septic system.

The planner went out there mid day yesterday and agreed with DH. Said the way DEQ had drawn this out what the stupidest he'd ever seen LOL. He also said don't worry about moving the well. He'd approve it and we don't have to pay the extra $700.

It's noisy and dusty and we got the perfect days to cause as minimal disruption to our neighbors as possible - they are out of town for at least a few days.

Speaking of neighbors. Our renter neighbor must be having an affair, but I do not know how his wife could not know. The kids know she's there and this is of course a very gossipy small town. DH says maybe she doesn't care. That woman with the two little ones, who always shows up at night (great mother to haul two babies around at 10 or 11pm and then back into her car at 2am or whenever she leaves), when wife is at work.....well, wife went to work Saturday evening (it appears she usually works 3-4 nights in a row and stays in the city). Girlfriend shows up later and spends the night. Sunday he, his 2 kids, the girlfriend and her two kids (a baby and approx 4 year old) all leave in his truck Sunday morning. Gone all day and get back early evening. About half hour later she loads up her kids in her car and DH had just gone outside to move a sprinkler and sees the guy leaned over at her car window - giving her a hug and a kiss.  Wife gets home from work the next morning. What a bunch of whackos. They give me the creeps just having them next door. LOL.
Posted by One Family at 7:59 AM