Yesterday turned into a partial holiday/day off from work after all. I got into work and one of the company owners had just sent out an email saying we were closing at noon and starting next year MLK Day will be a paid holiday for us all.  Nice! Just another reason why I love where I work so much. They are just always giving us nice little perks. So I left at noon, got home at 1pm and got to spend the afternoon with my DD before she went back to college after dinner.  A local friend had asked if she could give a ride back up to school to a friend of hers that was also returning to same school. It worked out great. They didn't know each other but got along well and DD got some gas money out of it :)

DD won't be home for my birthday (later in the month) so she gave me my gifts - a book to read, a Target gift card and the new Ed Sheeran CD. I looove Ed Sheeran's music :-)  Plus, I have a thing for redheads......(my first love was a redhead!)

Misty over at Digging Out from Our Mess does not like gift cards! And even though I didn't get a chance to comment on her post yesterday, I have to say I love getting gift cards :-) There is always something I either need or can find to buy. I received a very nice $100 Target giftcard from my boss for Christmas. As of Sunday it was all spent except for .40 cents. I bough the new sheets (a MUST have - I had ripped sheets and no replacement) and with the $36 left on the card I ordered this new work tote bag: 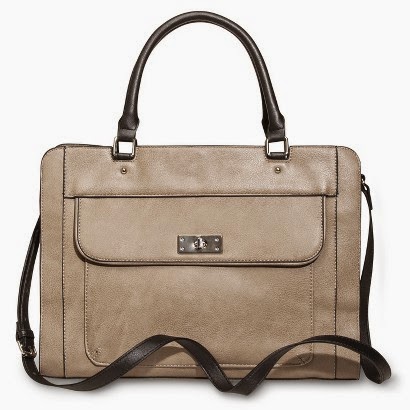 I've had my current one at least a couple of years, but it's getting out of shape with all the daily use and stuffing with files and my lunch bag. I'm sure if I bought a more expensive one to begin with it would last a lot longer, but since a Michael Kors bag isn't in my budget, this will do and it's not costing me any out of pocket money. I think this will be a great color for spring/summer.  See how easy that was to use a $100 gift card? LOL.

My mom also gave me my birthday gift really early - a nice little chunk of money. You know those ads that show up on the side of your facebook page....maybe from all the sheets I was looking at online a duvet set popped up and caught my eye. I'm getting ready to put my winter/xmas duvet set away and put back on my old cream colored duvet cover. I've been putting it off because it's pretty boring! It was very cheap ($35 on Amazon) and basically just like a soft sheet material and a light cream color. I bought it because it was what I could afford and I wanted something that the yellow dog hair wouldn't show up too badly between washings. But I don't love it at all! So, I clicked on the link on my FB page and eventually got to this duvet set  $99 and then I thought Hey! I can use some of the money my mom gave me to buy this. Then noticed my handy dandy "PriceBlink" price comparison gadget on the top of my screen said Walmart has this for $78! I went there and found the exact same thing (though under a bit of a different name). I haven't bought it yet, but I think I will. The rest of the money she gave me will be used to pay off the final couple hundred I have left owing on my CareCredit account (my no interest promotion is up next month and that is my last payment due.)

This is my dream bedspread! 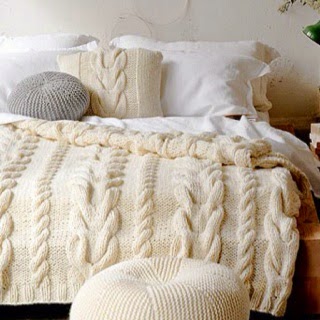 But since I don't have $500 to spend on a King size one, I don't know how to knit, and my yellow lab, who practically lives on our bed, would snag it to shred's, it will have to remain in my dreams. It looks sooo cozy though!  Maybe I could just get the throw pillow..........