It was a quiet, uneventful weekend. I decided to not drive to the city to do shopping on Saturday. I was getting all ready to go, about 9:30am, and brushing my teeth and just decided that I really didn't feel like driving almost an hour each way! Then I walked into the kitchen and saw it had started snowing. haha. No real snowfall until yesterday evening, where we got a couple of inches and it's only 22 degrees out.

I got some laundry done, vacuumed the house. That's about it for chores. Watched some tv and movies. I tried to get into The Crown on Netflix, but became bored with it about 3 or 4 episodes in.  I also got through a bit of my boxes of papers and was able to toss some of it out. I at least eliminated one smaller box and was able to add some into a file drawer.

About 6:30 this morning, for almost a half hour off and on, I kept hearing what sounded like snow shoveling and it sounded like it was coming from our neighbor. I was like what the heck? She literally works around the corner and across the street. Why would you spend all that work and time to drive your car one block. Just walk! Plus, their driveway isn't that big, why was there so much shoveling? did it snow more last night?...But once I got up and it was light enough to see outside (it doesn't even get light around here until almost 8am) it wasn't her. So, it must have been coming from the place across the alley behind us. I just saw a kid walking by to school - in shorts! Kids!

I know that to people who are used to driving in the snow, it's no big deal, but to those of us that aren't - it's freaky! I know I have some packages to pick up at the post office and want to get over there today. Guess I will have to brave it - haha! it's less than a mile and all flat. Plus I think they put de-icer on the main street through town. And a snow plow just drove by HA! The cars I have seen driving by so far seem to be getting along fine. Plus, I want to stop at the grocery store for a few things. I want to make some spaghetti for dinner, which I can eat for 2-3 nights.

I did some online shopping at Target. I didn't realize I could order grocery type stuff from there, with the prices being what I normally spend there (still cheaper than grocery store here in town), so I added a bunch of stuff to my order: mayo, tissues, dental floss, dog treats, dishwasher tabs, etc. I got DD a Target gift card for Christmas, as they were having 10% off of them yesterday, as well as a couple other gift ideas she gave me.

She and BF signed all the papers for their house on Saturday and it should close today and they can get the keys to their new home! What a quick and easy process for them. Just a bit over 30 days since they made their offer. The mortgage broker I referred them to is awesome. He did such a great job for them. He referred them to the agent they used, and they really liked her too. At her apartment they have been using the futon I bought for her, which isn't comfortable at all, plus they don't have a dining table. BF's parents are giving them their old sectional couch and dining set, so that is nice. I had given her our old coffee and end table awhile back, so they have that too. She just bought the washer and dryer and BF is going to buy a king sized bed and mattress for them. She has a queen sized one from IKEA, but they want a new bed and then can use this one as a guest bed.

It was a weekend of "found money"! I was looking in my cedar chest for something and flipped through a baby book - two savings bonds fell out! One for each kid. I thought I had kept all of them in our little safe box, over the years, (cashed in by now) but apparently not. I will take DD's to her when I visit next week. Not sure what to do with DS's. It does have my name on it too, as an "or" owner, so maybe I can just cash it out and take it off the thousands he still owes us......When I was paying for my Target order online I was getting out of my wallet 2 $5 Target gift cards I had in there. I also found a Visa gift card that I thought probably only had a couple dollars left on it. I checked and it has $21.54! Nice :)

We are surrounded by hills/mountains on all sides of us. Here's one of my views from our house 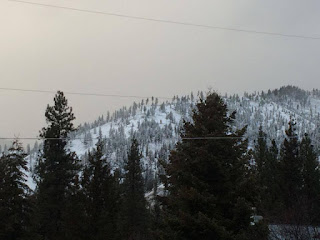